Kendall Jenner and Kourtney Kardashian are up to some antics!

In a video for the Poosh Your Wellness virtual festival on Saturday, Kendall pretended to be engaged while playing a hilarious game of truth or dare with sister Kourtney. Watch above.

The game got off on an easy start, with the sisters completing questions like “weirdest food combo you like to eat” and “jump a rope for 90 seconds.”

READ MORE: Kendall Jenner beefs up security after intruder attempts to swim naked in her pool

For one of her dares, Kendall, 25, was tasked with telling her family of the — fake — engagement news.

“Mom’s going to be like, ‘What is happening?'” Kendall says in the video. “But it’s believable, so I will do it. Does anyone have a wedding ring?”

“This is amazing,” Kourtney, 42, added. “You know Khloé is gonna write a novel.”

Using a ring someone had behind the scenes, Kendall snapped a photo and shared it with her sisters. Almost immediately after, sister Kylie Jenner phoned Kendall.

“First of all, it doesn’t fit you,” Kylie added, before Kourtney replied, “Well, it needs to be sized.”

The pair also spoke on the phone with sisters Kim Kardashian, 40, and Khloé Kardashian, 36, who weren’t buying the prank.

Kendall replied, “I know, it was so fun,” while Kourtney pointed out, “Well, at least we know you guys will be excited when the day comes.”

The pair, who first sparked dating rumours in April 2020, went Instagram official with their relationship on Valentine’s Day after months of keeping the status of their romance private.

For a daily dose of 9Honey, sign up here to receive our top stories straight to your inbox 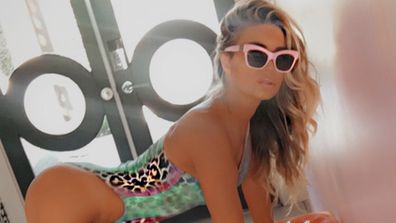 Boy, 16, is killed and 15-year-old girl is fighting for life after Audi crash in Scottish Highlands

Maths nerds, get ready: an AI is about to write its own proofs